END_OF_DOCUMENT_TOKEN_TO_BE_REPLACED

Dr. Alison Baverstock is the Course Leader of Kingston University’s MA Publishing programme. She’s contributed enormously to the industry over the last 25 years. She lectures and consults nationwide and has run multiple campaigns for reading and publishing, most notably being one of the founders of the Kingston Readers’ Festival in 2002. Her countless published works include The Naked Author, A guide to Self-Publishing and How To Market Books. Caitríona Marron from Words, Pauses, Noises was lucky enough to sit down with Alison and hear her thoughts on self-publishing, the role of the writer today and her tips for Kingston’s aspiring writers.

An Interview with Alison Baverstock by Caitríona Marron

How does your academic research influence your teaching and writing?

I find my research is hugely important to my teaching – teaching without being involved in research would feel slightly hollow, and it’s invigorating to have this lively bunch of minds available to discuss new ideas and see how they respond. Over the years, probably the most reliable source of new ideas has been my four children. They constantly challenge me, and it’s always stimulating to have your ideas stretched and hence developed. I am a very curious person and so often find new things to think about. For example, when I was expecting our first child, I read information for pregnant women that was rather patronising. It made me think about the best tone of voice to use to parents, and this was stored away years later when I co-wrote three titles on parenting. Nothing gets wasted in my life!

How important is knowledge on the publishing industry for MA creative writers? END_OF_DOCUMENT_TOKEN_TO_BE_REPLACED

The competition will be judged by a panel of writers, poets, and literary agents, and the first place winners in each category will receive a £100 prize. The winners and those pieces which are shortlisted will also be featured in our first physical publication!

Our categories are Short Fiction, Flash Fiction, and Poetry. You can submit one (1) work to each category, and that work may be on any subject, in any genre and style. That means anything, from romance to horror, science fiction to period pieces. We will not be accepting any interviews, reviews, essays, non-fiction travelogues, or excerpts of novels. Our standard submission agreement applies.

The word count limits are as follows:

FLASH FICTION: up to 700 words

The contest is running from 2 December 2013 until 31 January 2014 and all winners will be notified by email when the judging has been completed.

So dust off that laptop and get writing! We look forward to seeing a wide range of works and styles. For those still hesitant about putting something on the blog, this is a chance to submit anonymously. Your work will be read by agents and published authors, with the chance to be published yourself! 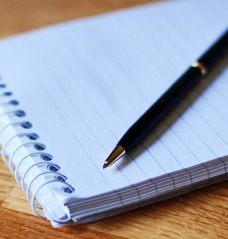 Adam Baron is a principal lecturer in Creative Writing at Kingston University, teaching on the undergraduate, MA and MFA programs. During his versatile career he has been an actor, literary editor, comedy writer and performer. Adam is a published author and his crime novels Shute Eye and Hold Back the Night were both adapted into drama series on BBC in 2009/10. Here he shares his thoughts with Words, Pauses, Noises’ Boyana Petrovich about studying creative writing, feedback, grades, how to get published and more.

Adam, what would you tell students about getting their work published? Is online presence important for young authors?

I think these days it is.

Do you think students should publish on blogs? Is that helpful?

Why not? Get it out there. Get your work published. If you get this blog up and working and people hear about it literary agents will go and look for work on there. They will. And if you have some sort of editorial board that says these are our favourite short stories of the month that will be a good platform for those students to get their work noticed. I send a report to literary agents who come to our Awards and Achievements Show, I think three were there last time and asked for it and they will look at it and contact the students if they feel there’s anything they can represent. Literary agents are hungry for new writers especially and are taking matters into their own hands rather than just waiting for work to be sent to them.

How did you first get published?

Advice I would give is try to meet people in publishing. I wrote to many editors saying can I read your manuscripts and one said yes, Alan Samson, a fantastic editor. He was then at Little Brown and sent me some scripts to read. I started giving him editorial feedback on the books that were going to be published. When I eventually said that I was writing a crime novel he told me to send it to these three agents and two of whom were interested. I think being able to mention his name helped, at least in the sense that it sped things up. I sent it to the right people. So, I got an agent, he got me an editor. Macmillan wanted to meet me and then they made an offer. I think the process is more or less the same today.

Do you have any advice on how to get published today?

Today – write something brilliant. More than ever you need an original take on something. The marketing people have an enormous power and unfortunately it is true that novels of lesser quality but with a good, flashy idea have a greater chance of being published than novels that are better but don’t have that. So a real leap for originality and voice and trying to do something new is what I think the publishers are looking for today.

My next question is about grading. What do grades actually mean to you?

To me personally I think they’re a marker as to where people need to go. If you look at our marking criteria a pass is a decent piece of work. It will get you a master’s degree and that is not easy to achieve. If you get above sixty that means your work is good to very good. And if you’re getting up towards seventy you have produced work that is readable, well executed; it may be raw in terms of its formal qualities, there may be errors in terms of clarity of writing, clumsiness in prose but you’ll have written a very good piece. If you get above seventy you’re approaching a sort of work that we think is going to be looked at seriously by agents and editors. And then, if I’m giving an eighty, which I do, very rarely, I am saying to that student I think that their work is as good as the published stuff I’ve read.

Often there will be elements in students writing which cross marking boundaries and then you have to make a decision, a piece that is say a sixty two with elements that deserve a highest possible mark. END_OF_DOCUMENT_TOKEN_TO_BE_REPLACED

Words, Pauses Noises’ Amber Koski offers an Op-Ed piece today about the world of publishing and how daunting it may seem for a new writer, fresh from their dissertation hand-in.

Many of our full-time MAs are nearing the end of their brisk year of study. Those preparing to print and bind their dissertations are also considering future publication opportunities. The world of writing has been transforming for the past few years and with those transformations come numerous avenues in branding your work and your identity as an author and the publication path that lay ahead. So what do we do as 2013 writers stepping out into the market we hope to become a part of?  END_OF_DOCUMENT_TOKEN_TO_BE_REPLACED

Kingston University has a notable list of specific programmes of study for Post Grad students to choose from, many of them involving writing and creative thinking. Lauren Weymouth, a Magazine Journalism MA student, sought out a practical, focused course that would implement the writing and reading skills she had acquired during her undergrad years while also fitting her for a niche career path, one that is ever booming and shifting to fit the changing media driven world. Lauren candidly discusses her time as a Magazine Journalism student at KU with Amber Koski.

Amber Koski: During your time at KU, you had the opportunity to produce a magazine with the other Mag. Journalism students. This tangible, end product has a certain affect and sentimentality to a job well done (something the Creative Writing grads only get once their dissertation projects are printed and bound). How have community projects like Mouth aided in your understanding of the publishing workplace?

Lauren Weymouth: Mouth gave me experience that I don’t think even a year at an established consumer magazine could have done. The knowledge that I gained whilst working for the magazine was paramount to my understanding of how to be not only a successful journalist, but also an indispensable team player. Essentially, we had to build a brand. We created a magazine from scratch and worked to establish its place within the current market. Compared to other years where MA students have produced a student magazine, we produced a local food magazine for Kingston— something that has never been done before. Because of this, it was even more essential that we did as much as we could to market and network the magazine within and beyond the community. For each issue, we were allocated a different position in the team. This gave us an opportunity to sample all elements of production, i.e. design, editing, social media etc. all while continually pitching our feature ideas and writing the successful articles. The whole process was intense, and, at times, overwhelming. But, it was all of these aspects of the project that provided us – and I say us because I know that everyone will agree with me – with an understanding of the publishing workplace that was much more hands on than we could have hoped for.

END_OF_DOCUMENT_TOKEN_TO_BE_REPLACED

June 1 is the debut launch of Words, Pauses, Noises. Excited to welcome readers and to present the talented Kingston University MA student writers.

Credit for the poster goes to Dushyant Bansal, a designer at the Royal Academy of Arts.

My Tweets
Join 501 other followers