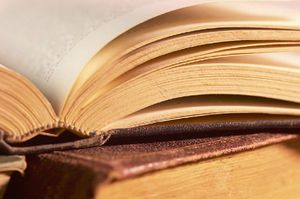 This week we have another riveting short story by Thomas McDade, who brought us ‘Skydiving‘ last week. In ‘Suffering Saints’, the prose is quick and punchy, with McDade never lingering on any one event, whether it be a priest smoking pot or an attempted bleach-induced homicide by a lover. The flow of the piece is fluid and perfectly-paced, the narrative voice is unique and humorous, and the characters do well to keep the reader’s attention throughout.

Lofty the Saint Maven had “gentle” stamped all over him as obvious as the scar on his face. He thought I knew about St. Lydia before we met but it wasn’t until I heard him reeling off Saints for the dwarf dishwasher that I looked up my name. A reference librarian gave me some of the information.  A St. Cloud Chapel priest I’d stumbled upon smoking pot at nine p.m. sitting on a park bench served up more details.  I was walking a manic Jack Russell Terrier when I whiffed weed.  Father Todd was wax bean of a man with a clump of unmanageable blond hair.  A sexton who saw his shadow on a wall said it looked like a royal palm but teens whispered “royal pain.”  I promised not to rat him out. Anonymous letters started arriving containing twenties wrapped in completed New York Times Sunday crossword puzzles, always in ink, nothing scratched out.  Father Todd was a slow talker as if his mouth were a puzzle block that took one letter at a time. The Monsignor reduced his sermons to short, as his long deliveries emptied pews. Lofty was a godsend. I’d just finished with a man who’d tried to poison me with bleach. He must have thought the LSD had taken away my sense of smell.  When he passed out I sneaked away after turning on the water in his bathroom sink, plug jammed in.

I regretted telling Lofty that the song he heard me humming was “Lush Life.” I worried he might think I had a drinking problem.  Well I did.  I’d been to AA on and off. My sousing led to some arrests.  My dog walking was payback to the Coyles, a kindly St. Cloud couple for springing me.  I knew Lofty was self-conscious about his scar the way he was always trying to grow a beard.  It just doesn’t work for some men.  I didn’t care. I’d had handsome gents, mostly barroom pickups I always managed to drink away after their true colors seeped.  I gave a baby up for adoption.  I had my tubes tied.  Lofty had never met anyone who knew so much about his or her Saint. Well, except for his aunt.  He was especially impressed when I told him St. Lydia was the patron Saint of dyers because of her purple cloth business. He’d once worked in a fabric mill in North Carolina.  Lofty had been around but the textile job hadn’t helped his fashion sense in the least.  He owned two sets of work clothes, khaki and dark blue.  He spruced up some after I dropped a couple of hints, surprised me with the decent threads he picked up at a hospital thrift shop.

I almost told him my birthday was Lydia’s feast, January 27, but decided to keep it in February.  I started taking better care of myself, had my hair done short and stylish like Audrey Hepburn. Lofty was a fan. I thought it strange a man liking Roman Holiday so much but he loved The Wild One and Scarface (of all flicks) too.  I had regular manicures, and took to eating square meals.  There’d been a method to my downtrodden look.  People feeling sorry for me over tipped.  Some of the regulars at St. Cloud’s took pity on me, slipped me an envelope occasionally.  Once I found two hundred dollar bills.  I promised rosaries! My goodness, just as a Saint would do!  My tears were sincere.  After my transformation, men I waited on left their business cards behind.  One card had an offer to work a pole at a gentlemen’s club scribbled. After taking Lofty to the Chapel on our first date, my fans increased their donations.  I reckoned they were hoping they were funding a hope chest.  I guess you could say I seduced Lofty in a Saintly way. The first time I took him to my apartment I sat him down on the corner of my bed, told him to close his eyes.  After changing into a negligee of my Saint’s color and walking out, I lit three votive candles and gave the okay. His eyes nearly popped out of his head.  He claimed I was his first but he was too good for that to be true.  Who was I to question? He said sweet things about my legs and the acre between my knees and half that distance dividing my tennis ball tits.  Those measurements came from Freddie the waiter who failed to run his plow as well as his mouth. Lofty was high performance in both respects. The bonus was that he was low maintenance.  I ran a fingernail along Lofty’s scar, called it a stigmata.  He liked that. He told me his life story and didn’t leave out his love of car theft.  Hard to believe but I went with him in a hot, hunter green ’55 T-Bird. Anyone else but Lofty and I would have had to down a bunch of shots before and after.  What a time we had.  It had a working clock and a radio that with great sound, an important point on Lofty’s checklist.  He found an old time radio show, Suspense:  a drama about a shipwreck, thousands of rats taking refuge in a lighthouse.  It was too scary for Lofty.  He’s funny that way, steals cars left and right but fiction can upset him.  All it did was sadden me, thinking of my dead grandparents.  Maybe they listened to the same drama when it was new.  Likely, all the actors and actresses were gone too. Sure, I was disappointed when Donovan busted him in the Jag XKE but I took in a Saintly way, called his absence my cross to bear and offered it up for the souls in Purgatory. My St. Lydia was a convenient sort, didn’t do any physical suffering or end martyred.

I hated that punk cop. He’d taken me in twice for drunk and disorderly.  I don’t expect it will be the last time I see his wretched face either. I took to humming The Daytonas’ “GTO” song.  That muscle car was on the Lofty joy ride list. Father Todd believed that Lofty had a prison wish, wanted to suffer like the Saints. Let him.  That’s all Lydia Cory has to say about Amory Loft except that things that seem like they will never change swing around and do.  Life pulls a body around like a manic Jack Russell Terrier and makes Saints us all.

McDade does well to write memorable scenes and vivid images that stick with us after we’ve finished reading. Join us next week for another great post!